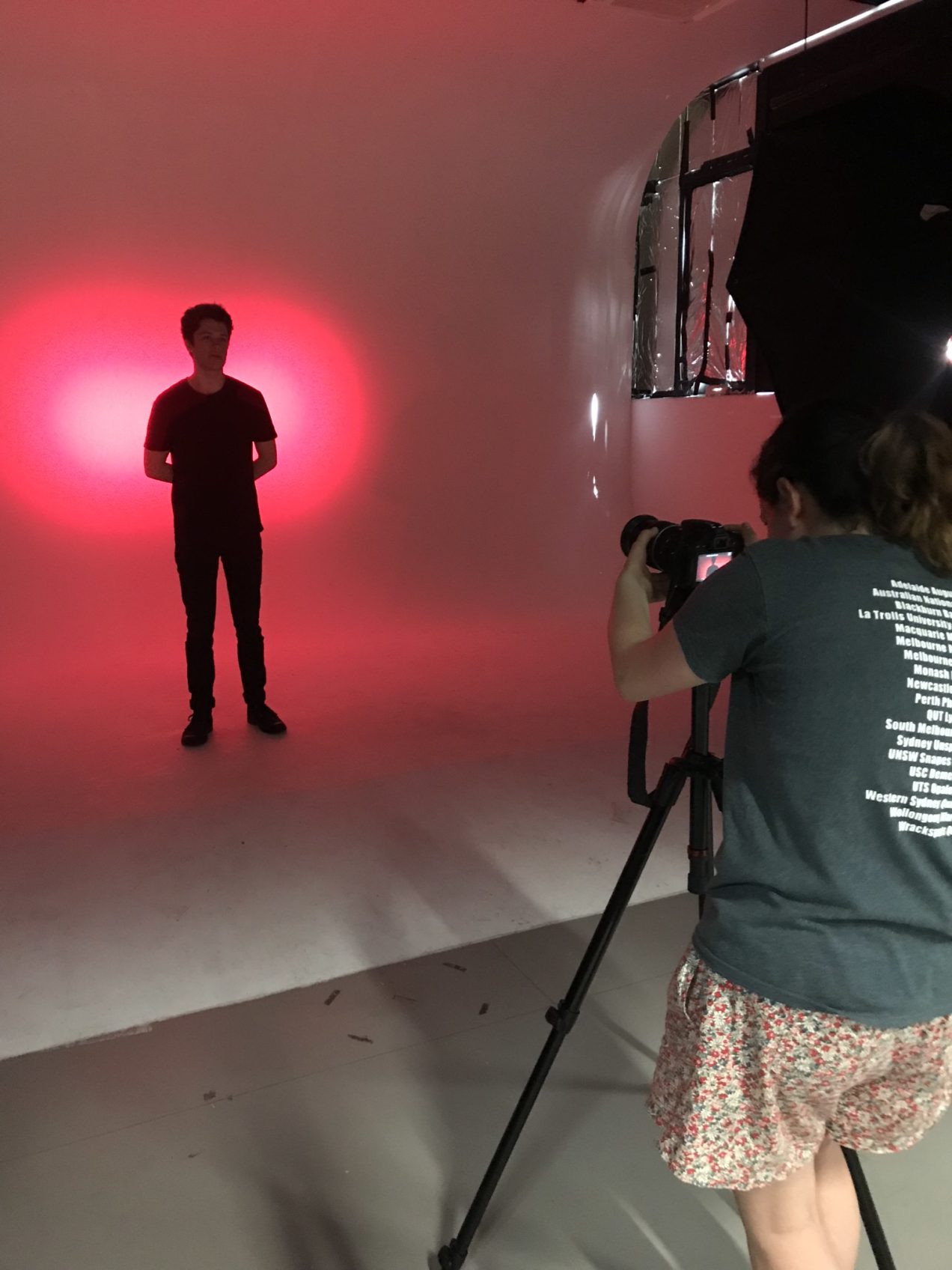 Yesterday was our first day of production for the music video. We decided to squeeze it in before Olivia went away to Perth so that we’d have some footage to start editing while she’s away.

It was rather ambitious, but between the four of us we had estimated that we should be able to setup the various studios, coordinate our talent and conduct the shoots quickly.

Olivia put together a comprehensive call sheet for the cast and crew, and I wrote a detailed shot list for each scene concept, outlining the type of shot, actions to be performed by the actors, and costumes and props required for each scene.

As we would only have very limited time in the white cyclorama studio, I emailed a memo to the team members the day before outlining the revised order of the shoots, a briefing of what would be happening throughout the day, and the reasons for the changes.

We set a 12pm call time for everyone to meet at our regular studio space. Our first challenge was that not everyone arrived on time and some people went off to get lunch and what not, so we didn’t get a chance to fully brief everyone at once about what would be happening that afternoon. This ended up causing some confusion as to what hair and makeup was required and when, which the led to a significant delay getting started in the white cyclorama studio. In order to get things going as quickly as possible, Molly, Amber and I set up the studio and conducted some test shots while Olivia coordinated the talent. We then got started shooting with the talent who were ready and available while we waited for the female lead to finish in hair and makeup.

This part of the day felt very rushed, stressful and confused. However, when we actually started shooting and I watched the footage that was being filmed through the camera, it looked SO good and I felt a great sense of relief. The colour effect from the lighting turned out just as I was hoping for and the talent performed well. We ended up actually having fun during the shoot!

Meanwhile, Molly and Amber went over to the green cyclorama studio to set up and shoot there. The detailed shot list really helped as they could go and shoot what was required without needing the rest of the team there, and they got those scenes completed reasonably quickly. Olivia took our female lead out to do some external shooting as well and, despite the earlier feeling of chaos, we still got ¾ of the footage we wanted done by the end of the day.

Even with all of our planning, its safe to say that things didn’t run perfectly. At the end of the day I feel like we worked hard as a team to get the job done. I have certainly learned a lot about working through the challenges of a shoot, and the importance of being prepared enough so that you can actually exercise flexibility in order to overcome unforeseen delays and any other issues that may arise.

The practical experience that I gained during the shoot has been so incredibly valuable. I learned more in one day coordinating a shoot than I could have in reading a thousand academic papers on the subject. While I felt anxiety and stress at times throughout the day, one of the most important lessons was that you do have to learn to let some things go and delegate with the understanding that you will have to let others take charge of those tasks and execute your plan without you being there to oversee the results. Will things turn out the way you expect them to, or want them to? Probably not – but they may even turn out to be better than you’d originally hoped. At the very least, they will be different, and you need to trust your team enough to know that different will still be satisfactory in the end.