Instead of pitching a strict narrative concept to my group, what I had in mind was a set of scene concepts that could be intercut to tell a story without necessarily sticking to the classic narrative structure of film.

The overarching “story” is that of a criminal duo out on a crime spree. Instead of enjoying their loot together the male lead screws the female lead over, leaving her to be caught by the police while he escapes and lives it up on the proceeds of their crime. She plans her revenge from jail and…

…well I won’t spoil the rest just yet. Needless to say, we’ve had fun fleshing out the basic concept!

So, back to the idea of scene concepts. The first of these concepts is that of the band playing in gaol, loosely inspired by the 1950’s teen pic Jailhouse Rock.

I envisioned the lead singer in something orange, channelling the feel of an orange prison jumpsuit but with a retro vibe, like a 1960’s go-go dress: 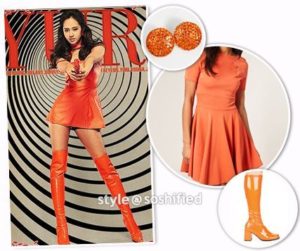 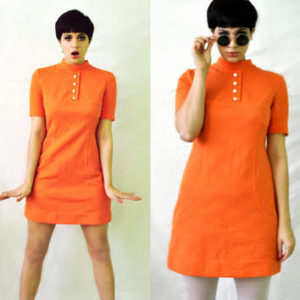 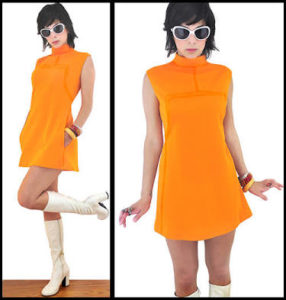 Olivia has a vintage microphone we can use as a prop for our singer as well.

The band members will wear black and white striped shirts, along with basic black pants and shoes, and their signature fedoras and sunglasses. They’ll be holding their instruments as well.

The scene will be set in a studio with a black curtained background. We will use three-point lighting that will allow us to highlight the band members and create nice, clean shots while also highlighting the lead singer’s orange dress. Here is an example of how we can setup the lighting to enhance the colour of the lead singer’s costume: 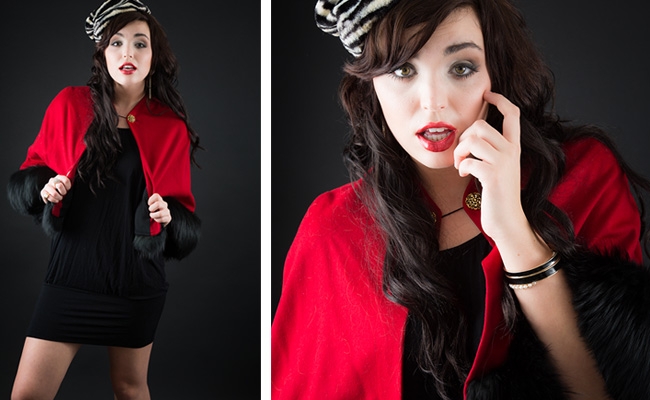 The band would be positioned in a semi-circle around the lead singer. We’d have the band perform the song in studio and take a range of long, mid and close up shots of the whole scene, the singer, and individual band members, as outlined in these storyboards (please forgive my inability to draw!):

I think that the orange dress will really stand out, highlighting the singer. Overall, I think that this scene concept will channel the jailhouse vibe without having to create literal sets.